The feel good story of the season. How the humble tray became a design classic and a beacon for the renaissance of manufacturing in London.

The Back Story: Good Times

The Shreiber family produced anodised aluminium components for radio and radar during the Second World War under the brand name A. Kahn. Anodising, coating metal with a protective oxide layer by an electrolytic process, was then a new and exciting innovation, and after the War, the business looked to develop other applications for the material. In 1947 the Kaymet brand was born (K for the original Kahn. Met for metal). At the British Industries Fair in that year Kaymet was listed as ‘Manufacturers of Fancy Goods, consisting of Fruit Bowls, Sweet Dishes, Coffee Trays and Tea Trays’. And Lord knows, we love a fancy good.

Business boomed. The company exhibited at the Festival of Britain in 1951. In 1952 trays were supplied for the SS Gothic when it was refitted at the Cammell Laird shipyard as the Royal Yacht. The trays were used on the Queen’s coronation world tour in 1954. In the same year a state of the art factory was built in Peckham. By 1956 Kaymet was selling through 64 international agents and had customers in almost every country around the world and by the 1960s the factory employed nearly 200 people.

But during the 70s the business began to contract. Changes in lifestyle in Britain (less formal dining, smaller households) meant that core Kaymet products (the trolley and the tray) were no longer essential to British life. Plastic alternatives were readily available and competitive foreign imports began to predominate. 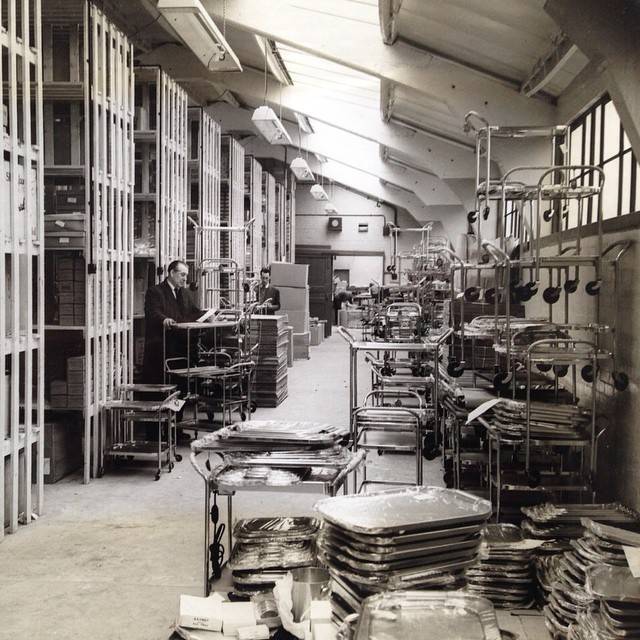 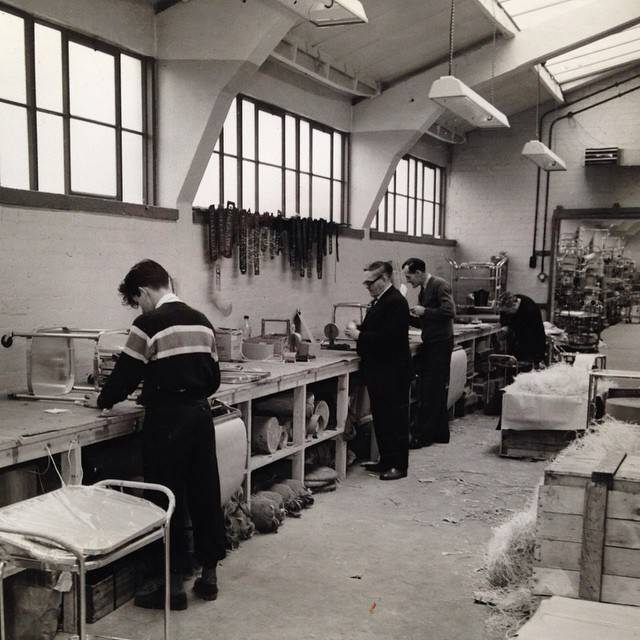 The Back Story: Resurrection

Step forward knight in shining armour, Mark Brearley. In 2013 Brearley, former Head of Design for the London Mayor’s Office, was compiling a list of London manufacturers, prompted by his search for 50 London made things for his wife’s birthday (check out his Instagram feed madeinlondon.uk which shouts out more than 3,000 London made things from Golden Syrup tins and Jackpot peanut butter to multi grain bread and hand embroidery). Kaymet made his list and a factory visit to choose a birthday gift proved something of a turning point. The Brearleys, working alongside Ken Schreiber, the son of the founder, got involved in the business, appreciating the immaculate production; identifying the importance of the brand’s design heritage; and seeing an opportunity to introduce the products to a new, younger, more design savvy audience. 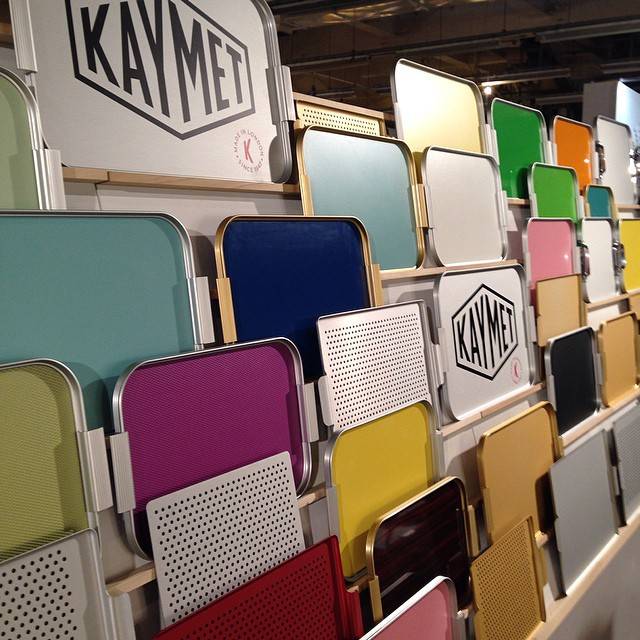 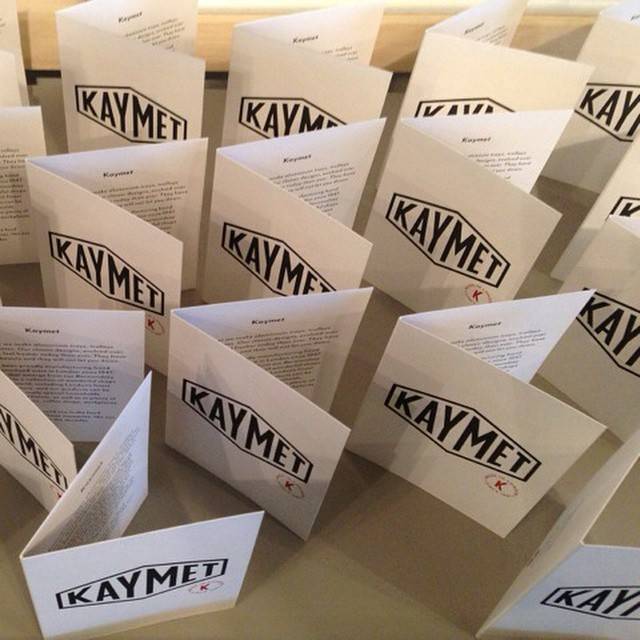 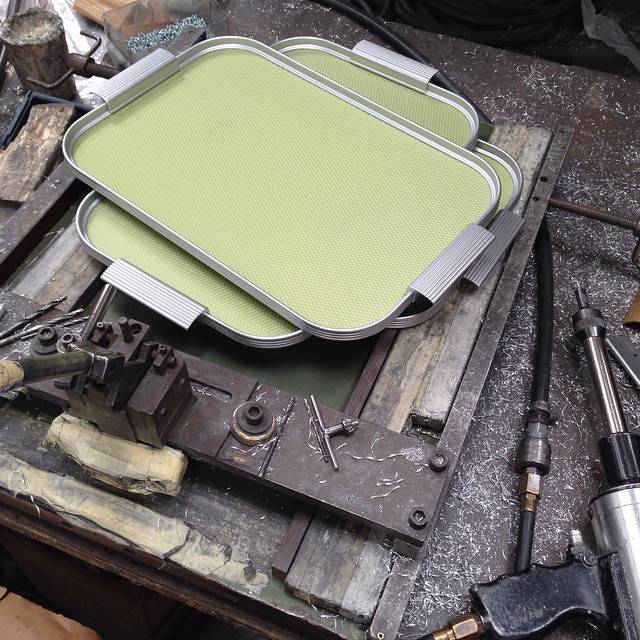 Everything is hand made at the factory in Ossory Road (still very much in South East London) with in-house operations including chopping, guillotine cutting, cropping, graining, pressing, punching, turning, bending, drilling, linishing (this isn’t a typo, I didn’t mean to write ‘finishing’, linishing is the process of removing excess material with an abrasive belt), polishing, and assembly. Kaymet extrusions are produced up in Cumbria, powder coating is done by a business a little further along the Old Kent Road, and anodising sent out to one company elsewhere in London and another in Crawley. All packing and dispatch also takes place at the Peckham factory. This is a business which very much flies the flag of British manufacture. 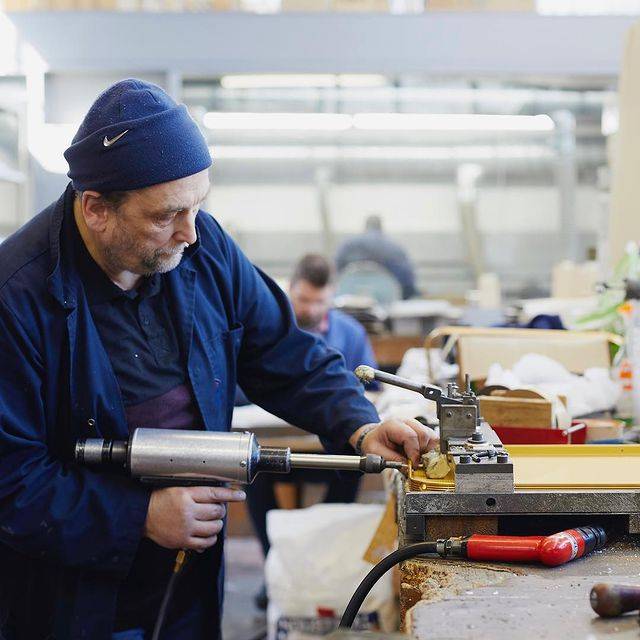 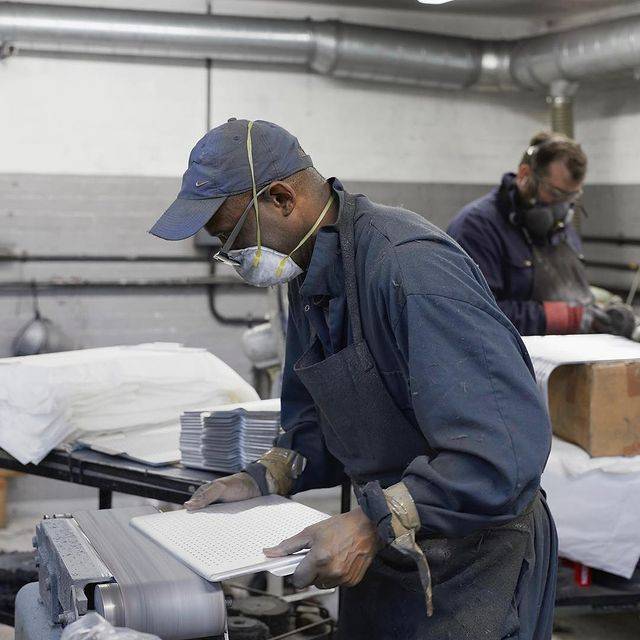 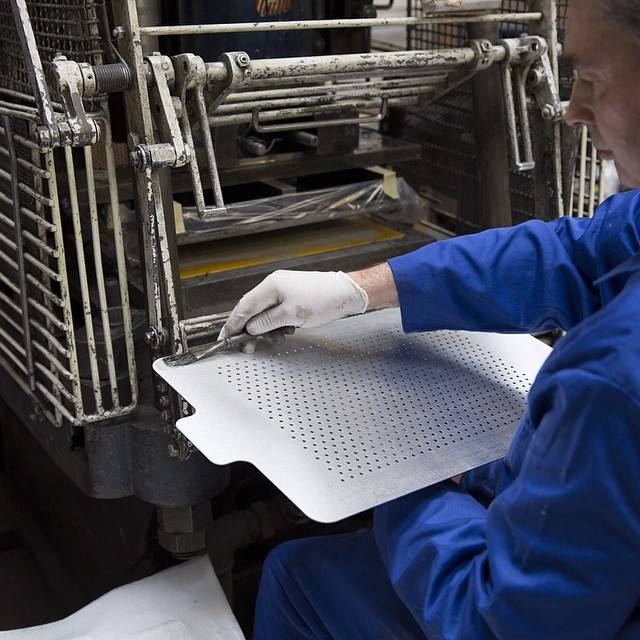 We love, love the trays. Durable, simple, beautifully designed and both modern and charmingly dated. We love the lap tray. It conjures up images of 1950s silver screen divas taking breakfast in bed. Possibly wearing a fur jacket. Possibly smoking from a cigarette holder. Possibly wearing a little more make up than is strictly necessary. A lap tray is the aspirational choice. The small and large trays (in gold, mellow green and pink finishes) are perfect for traditional tray use (who knew?) but also ideal if you want to get involved in a little chic tray styling (of which more later). 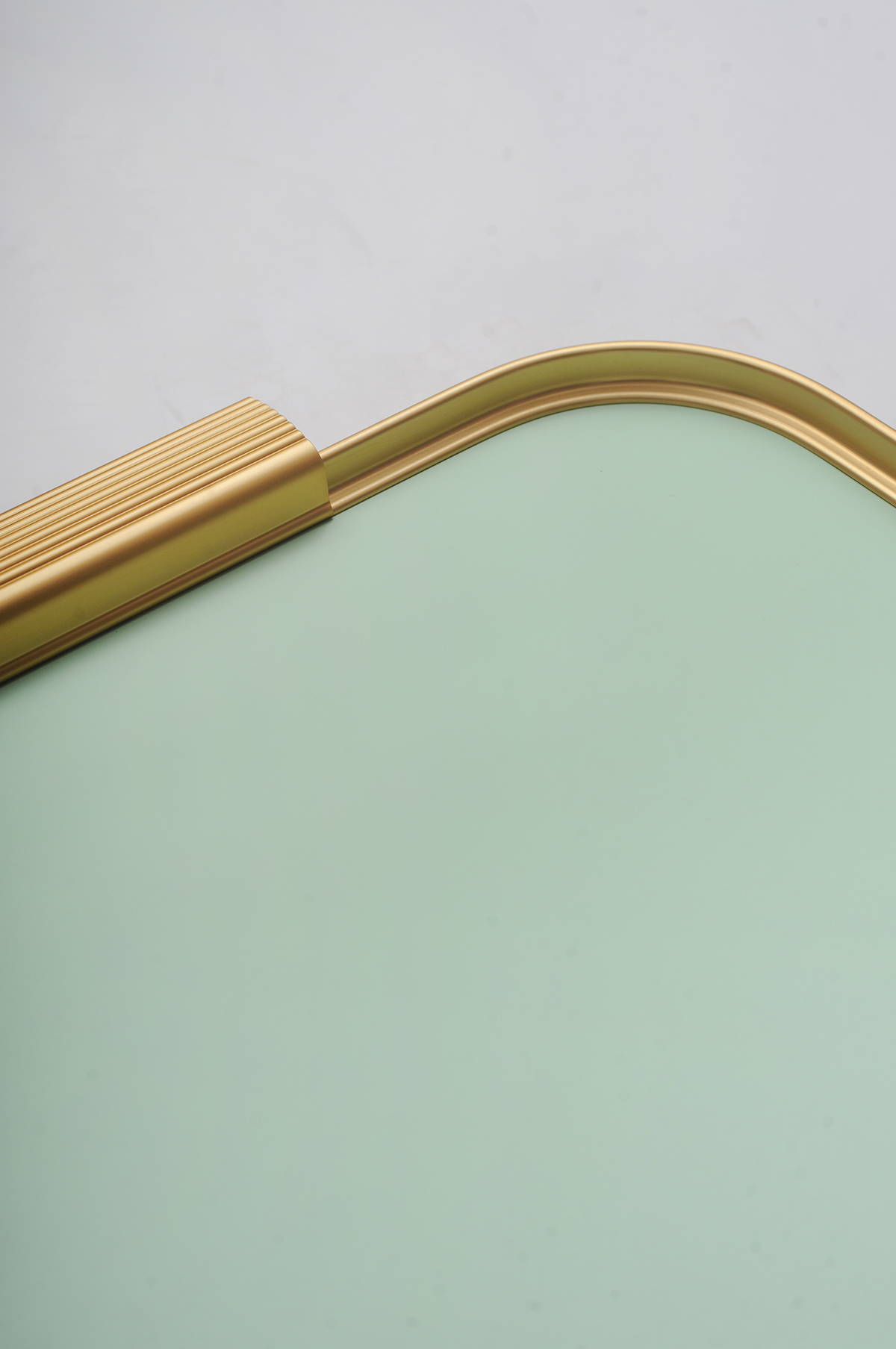 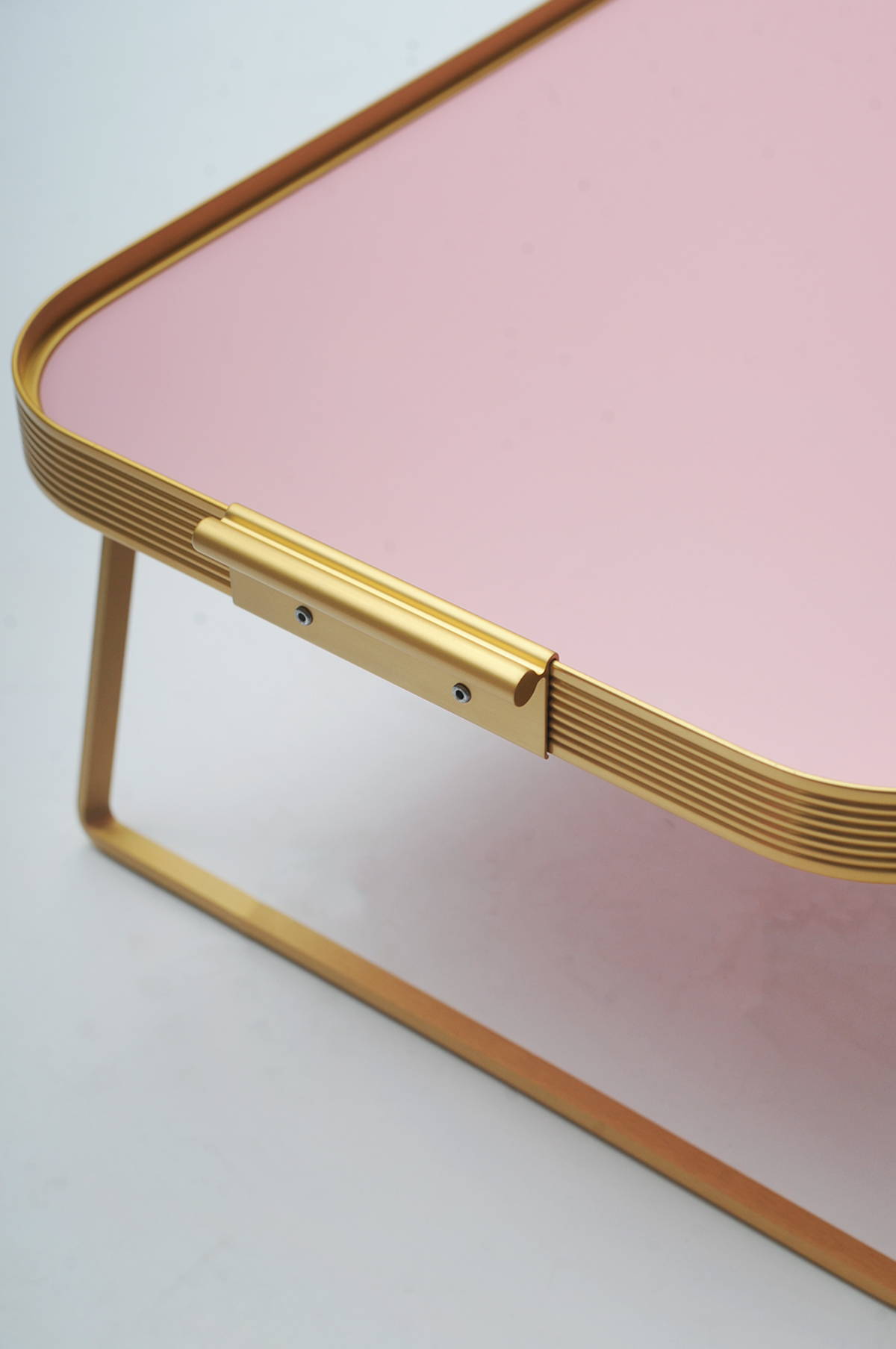 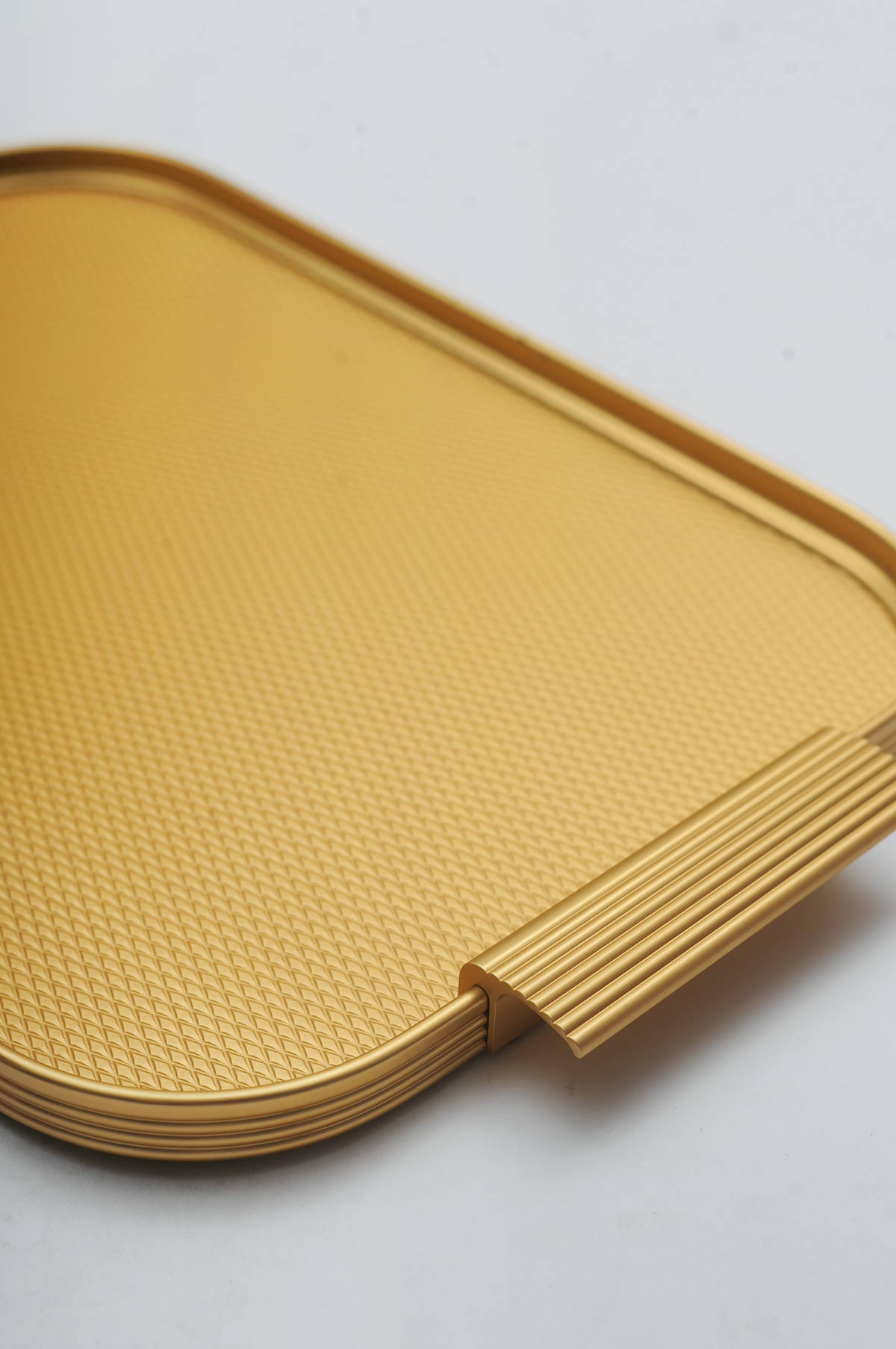 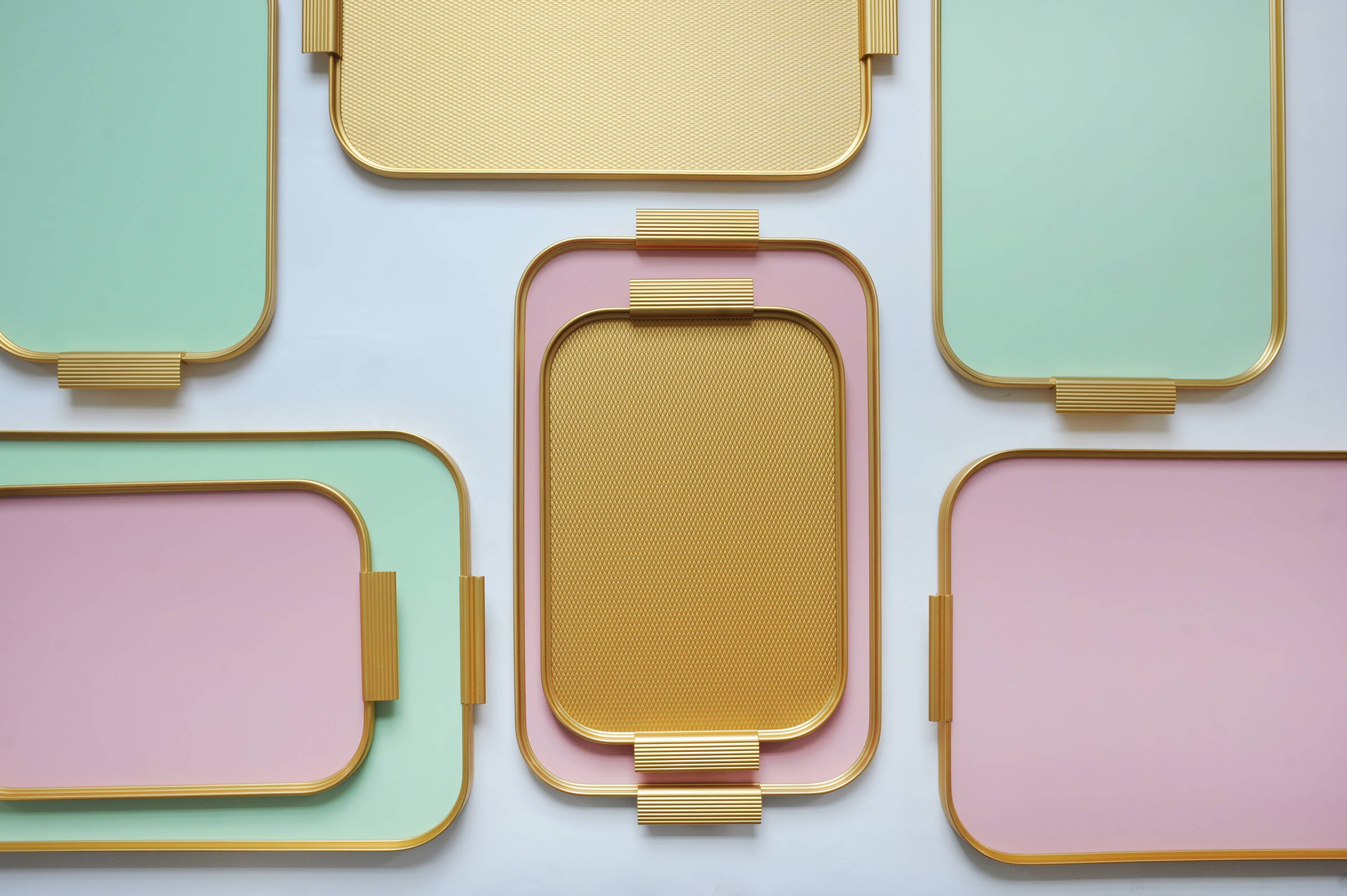